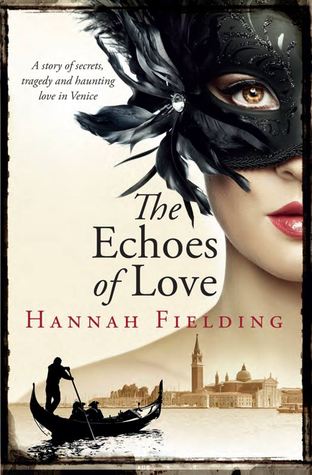 Click on the picture above to buy this book on Amazon

I received this book for free from the author in exchange for an honest review.

This is an odd book for me to rate because I found the first half of the book to be 2 stars, but the second half was 4 stars. My final rating for this is 3 stars, which is the average of the two.

On an unrelated note, when I first saw that one of the epigraphs was an excerpt from Burnt Norton I was really happy. I love that poem mainly because Lana Del Rey recites it for her interlude on her Honeymoon album and I love Lana Del Rey.

So the first half of the book was 2 things: slow and cringe worthy.

In regards to its slowness, I thought that it took way too long to get to Tuscany. It took nearly 150 pages for our main character, Venetia, to finally get there. I felt like the story didn’t actually start until she arrived. A lot of the first half of the book was Venetia being wishy washy towards Paolo. She would think to herself, I love Paolo. Then the next page she would be like, I don’t love Paolo. That continued regularly until about half way through and made the book go by so slowly. I got pretty annoyed with her because she could not make up her mind. A good portion of the first half could have been removed because it was all really repetitive.

As for the cringe worthy parts, there were two lines in particular that drove me nuts. The first line described Venetia as having “neither racial or social prejudices” (41). Like okay. That’s kind of an odd thing to say in a book. The second line was when Venetia asked the Chinese fortune teller, “How come you speak such perfect English” (98). As someone who is half Asian, I really have an issue with that. It just adds to the perpetual foreigner stereotype that gets attached to Asians. It wasn’t even a necessary question for the story. Another thing that had me cringing was how predatory the males were in the beginning. Count Umberto was so horrible and even Paolo was a bit too much with his constant demands.

But then the book moved to Tuscany and things got a whole lot better. Paolo and Venetia became less annoying. There were conflicts which finally got the story moving (I loved Allegra’s character. She was really interesting). The romance finally heated up. A lot of the time it reminded me of Jane Eyre and Beauty and the Beast, which isn’t surprising considering Beauty and the Beast (the original fairy tale version) is mentioned on page 304 and Jane Eyre is mentioned in the author’s Q and A at the end of the book. I could definitely see the inspiration and since I love both of those I did end up enjoying the second half.

As for the big reveal at the end, I had already figured it out by that point so I wasn’t super surprised by it.

Overall, this wasn’t the best romance due to its overly long beginning but the second half saved this book from becoming a disaster. I’m am curious to read more from Hannah Fielding because out of all her books on Goodreads this one has the lowest average rating of only 3.66. All her other books have an average rating of over 4. I’m hoping that this book was just a fluke and not representation of her writing as a whole.

One thought on “Review: The Echoes of Love”

Join 7,385 other subscribers
Follow Odd and Bookish on WordPress.com

Jessica's ReaderRank
Jessica has reviewed 654 books with an average rating of 4.216 out of 5.
13758 people have found Jessica's written reviews to be helpful on Goodreads.
See more...

Top 10% in books from large presses

Hi beauties! Today I have a review for The Lady of the Mirrored Lake by @jenniferivywalkerauthor. This is the second book in the series and I gave it 5 stars (⭐️⭐️⭐️⭐️⭐️).
Hi beauties! Today I am featuring a book that published this week, Take Command by @joseph_k_hart. I am very excited to start reading this book soon. It’s a self help which I think is perfect to read at the beginning of a new year.
Hi beauties! Today I wanted to share a cool unboxing of a box I received from @disneybooks and @bighonchomedia featuring A Ruinous Fate by @kaylsmoon. This book sounds amazing and it has a map! I love when books have maps, especially fantasy books. It makes the story so much easier and fun to follow.
Hi beauties! I finally decided on what my first book of the year should be and picked Hermes: Heavenly Days. This is a coffee table book from the iconic brand @Hermes and contains cute little cartoons. I am in love with it. The book itself is so luxurious which is on brand. Even the paper is super thick.
Hi beauties! Today I wanted to share some amazing puzzles @oddpieces.co sent me. These puzzles are super cool because the image on the box is not exactly what you build. Plus, while building the puzzle there are hidden clues, secrets, and mini-stories to find until the very last piece where the secret ending awaits. How fun is that? Now that I have more downtime I will definitely be building these. If you are interested in these puzzles, use my code ODD&BOOKISH10 for a discount!
New year. New bookshelf. Before I moved, I downsized my book collection significantly and got rid of the majority of my bookshelves. I used to have all white shelves but felt like that was too boring so this time around I got a dark brown one. I love it! Since this shelf is downstairs I’m using it to display my favorite books and my prettiest ones like my collection of @canterburyclassics.
Hi beauties! Today I wanted to showcase this gorgeous new oracle deck I received from @BeyondWordsPublishing, Sacred Nature Oracle by @HollyWilmeth. This deck is stunning (the photographs are marvelous) and highlights a different plant on every card. The guidebook not only attaches meaning to the cards but also gives some background and history to each plant.
Currently Reading: The Wild Rose and theSea Raven by @jenniferivywalkerauthor (Thank you @thewildrosepress and @bookinfluencerscom for the book). This book is a retelling of the story of Tristan and Iseult and so far it does not disappoint! It’s fast paced and wastes no time getting right into the story. It’s been a while since I’ve read a fantasy and this book is reminding me why I should read it more often.
Hi beauties! It’s been a while since I last posted. That’s because I moved! Because of that I haven’t read anything in ages. I did go to a Dollar Tree nearby and they had an amazing selection of books. I didn’t buy any because I have enough unread books as it is and I’m trying to be good and not add more to the pile.